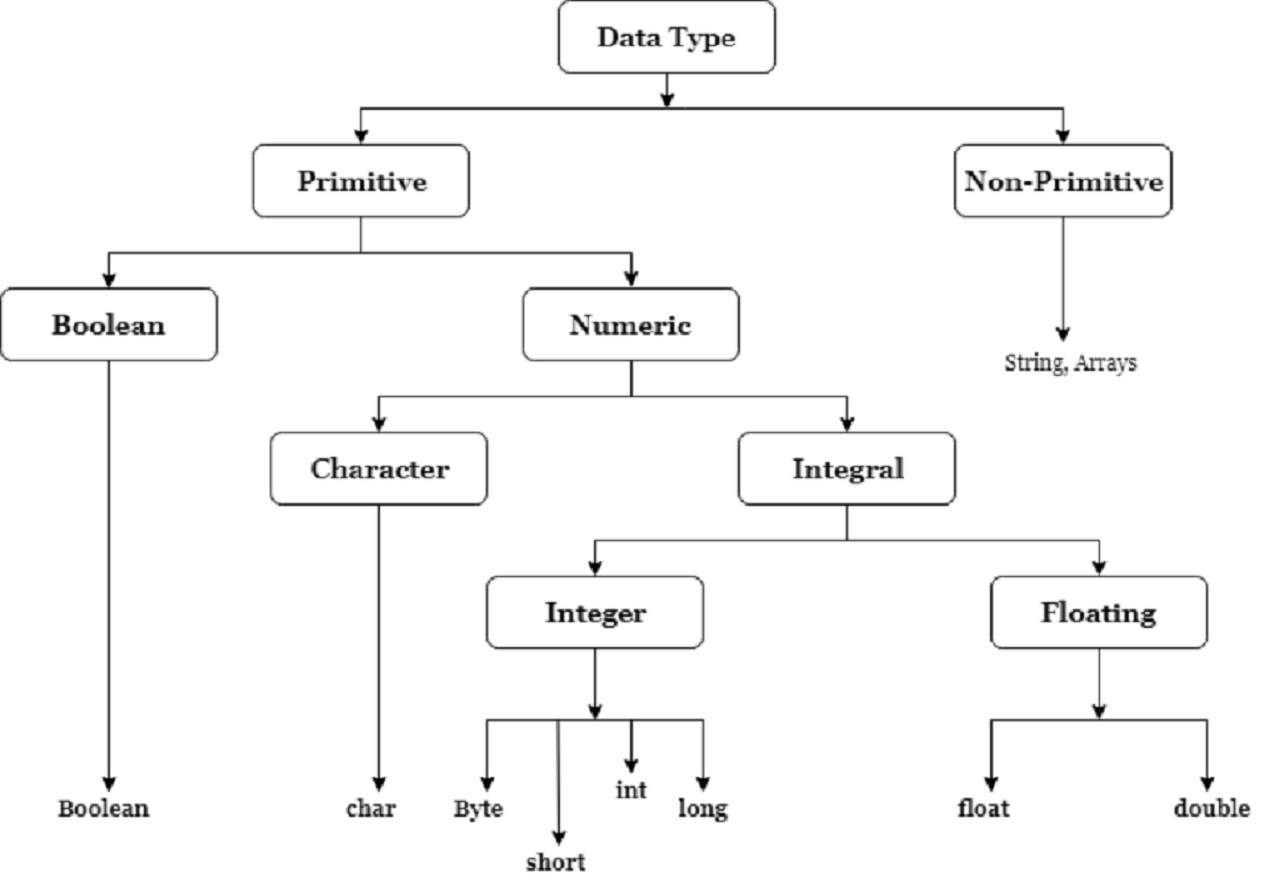 The data types defines the type of values that a variable can take, for example, if a variable has a float data type, it can only take float values. In Java we have two categories of data type:

Java is also one of the statically typed languages. It means the data type of a variable is known at compile time. So, it means you must declare the variable before using it.

So in order to use the variable goal in our program, we must declare it first as shown above. It is a good programming practice to declare all the variables (that you are going to use) at the beginning of the program.

Okay, now let us know the datatype of Java.

There are 8 basic data types in Java that are certainly used to build the program. They are also helpful in data manipulation. They are:

Here is the table that helps you to know the better about the data types and its default value and default size in the Java.

This datatype occupies 1 bit of memory. This data type is used to store only two possible values viz. true or false. In Java, ‘true’ and ‘false’ are reserved words to represent logical (boolean) values. They cannot be assigned to another data types nor other data types can be assigned to boolean values. It specifies one bit of information.

boolean b=’true’; is not valid ✕

boolean c=”false”; is not valid ✕

boolean e=1; is not valid ✕

Byte data type used in Java occupies 1 byte of memory and is 8-bit signed two’s complement integer. The value of the byte data type lies between128  (-2^7)  to 127  (2^7-1). Its minimum value is -128 and the maximum value is 127. Its default value is 0. The memory in large arrays can be saved using this data type as it is 4 times smaller than an integer value.

The byte data type is used to save memory in large arrays where the memory savings is most required. The memory space can be saved 4 times than the use of integer data type if you are certain about the range.

We can also use it to use with single characters (ASCII up to 127). It is mostly used when you are sure that numbers would be in the limit specified by byte data type. (for example numbers of goals in a football match.)

It is used to save memory as it is 2 times smaller than an integer. This is Example:

An integer can store 10 digit values but if we want a value bigger than this range, we can use the long data type which can store up to 19 digit number. It is also a data modifier in C, but a data type in Java. The long value needs to include the letter ‘l” or ‘L’ in its suffix when using a constant bigger than int range.

The float data type is used to work with the fractional part. It occupies 4 bytes of memory and generally preferable when you want to save memory for a large number of floating arrays.  Its default value is 0.0d. Float data type cannot be used when you need precession like in currency.

The float cannot take decimal values directly but it should be converted to float before assigning. So in regular programming itis not used.

Double is preferred over a float in regular programming because of greater accuracy with a double data type.It is sufficient for holding 15 decimal digits size and occupies 8 bytes of memory. It’s default data type for storing decimal values.

A fixed value that we assign to variables in a program is referred to as Literals.

Here, value 19 is an integer literal.

The value assigned to the variables to the data type byte, short, int and long are known as integer literals.

The value assigned to the variables of the data type float and double are known as Float Literals.

Note: To make compiler recognize the float value, always use suffix “f” with float value else compiler will certainly consider it as double.

These literals area associated with the char and String type.

Why Most Of The Programmers Prefer “Double” and “Int”?

Generally, In programming when the operation is performed on bytes or shorts, they are upcasted to int data type internally before the actual operations take place. Similarly, ASCII value (integers) are added when we try to add two characters.

Certainly, Java does not allow bigger type data to be assigned to the smaller type. So it is advised to use integer type or even to store small values.

So, the system considers fractional value as double by default. If we try to assign the fraction value to a float, we are likely to get a compilation error. That’s why double is preferable rather than float.

12 Buzzwords in Java (Features of Java)

Types of variables in java with example - Saral Notes
[…] int is a datatype that denotes that variable can hold the integer values. There are two types of Datatypes viz. primitive and […]