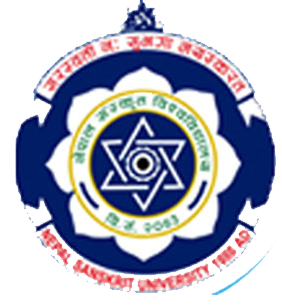 It is the second national university in Nepal. The university offers Intermediate (Uttar Madhyama), Bachelors (Shastri), Masters (Acharya) and Doctoral Courses in classical and modern Sanskrit. It also offers Intermediate Courses in Ayurvedic medicines and condensed courses for Ayurvedacharya. This university was established to enable people including scholars of other nations to secure wholesome knowledge of Sanskrit and to develop Nepal as a center of learning in Sanskrit. The central office of this university is in Dang. The university has 12 constituent and 1 affiliated private campuses situated in different parts of the country

Nepal Sanskrit University aims at producing qualified scholars to safeguard national culture and produce competent men power in Ayurveda, Jyoutisha, Yogic Sciences, and naturopathy along with Sanskrit Scholars to meet the national and international need. NSU runs classes in modern subjects like Nepali, English, Economics, Mathematics, Political Science and Pure science keeping view with the demand of time and need of the country. Apart from regular programs, Nsu runs mini-research along with Ph.D. program. Research Center, a separate wing  to carry research work, has been set up in Kathmandu.

The central office of the university is situated at Beljhundi, 16 kilometers west of Gorahi, the district headquarter of Dang. The central office owns 342 Bighas of land donated by various donors and 1336 Bighas of fertile land at Deukhuri, Dang. University Vidyapeetha, Central library, Hostel, and Trilokeshwar Shivalaya have added additional beauty to the central office. Its liaison office is at Basantapur, Kathmandu.

error: Please be respectful of copyright. Unauthorized use is prohibited.