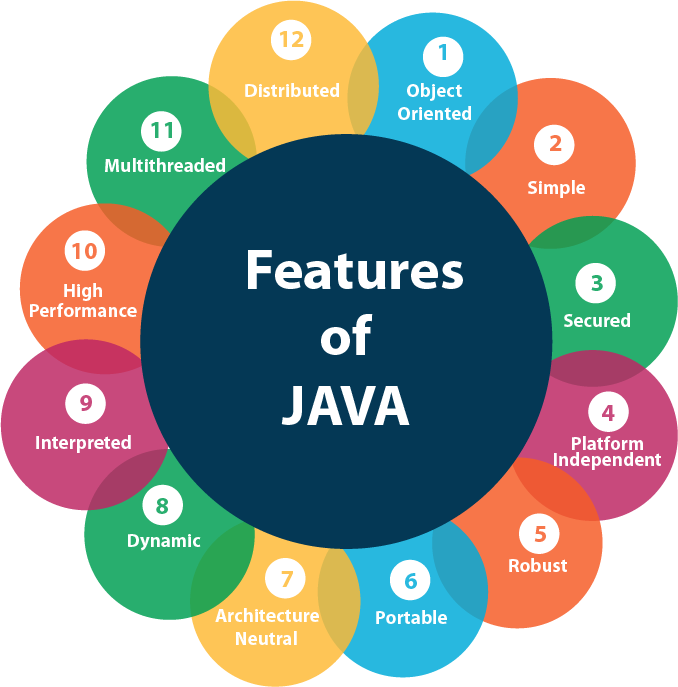 Java was primarily developed to run on a great variety of computer systems and computer-controlled devices. It is also known as WORA (Write Once, Run Anywhere). So, the developers of the Java keep in mind to provide the users with various features that earn its popularity. These features also included in the white paper of Java are named as buzzwords.

Following are the enlisted Java buzzwords.

If you are familiar with the C++, you’ll feel easy to program in Java. Most of the syntax in Java are refined version of C++. Indeed if you are a programmer with the Visual Basic background, you’ll find a little bit hard to get used to it. If you intend to learn a program, you’ll quickly learn Java in small time due to its simple syntax.

To summarize, Java is simple because:

The object-oriented concept is a proven means for effective and manageable software development. This concept evolved more than forty years ago, so most of the modern programming language use this paradigm. Java is a pure object-oriented program where everything in Java is object-oriented. The main difference between Java and C++ is the multiple inheritances, which Java replaced with a simple concept of interfaces.

The basic concept of Object Oriented Programming are:

Remote Method Invocation (RMI) and Enterprise Java Bean (EJB) are the distributed applications that are programmed using Java. Simple and easy networking capabilities in Java makes its choice of many programmers. The distributed structure of Java ensures to call any machine in the network (internet) by just calling its method. Java handles other hidden tasks like opening and closing a socket.

Strong is the synonym of Robust. Java Compiler detects error detects before runtime, which other programming language lacks.  Also, there won’t be pointer problem in java.

Here are some points that make Java robust:

Elimination of security problem is possible since we don’t use pointer in Java.

The type checking mechanism and exception handling are present in Java.

Some security features of Java are:

Java doesn’t implement the dependent features for the different machine. Hence, it is architecture- neutral. An example is the fixed size of a primitive data type.

When you program, compiles and generates the bytecode you can easily transfer the bytecode and run on any machine. The machine can be different versions of Windows, Mac or various flavors of Linux. In addition, Java let you run the program without the need for any implementation.

Java is an interpreted language. The bytecode generated by the Java compiler can certainly run on any machine has an interpreter. Early Java development tools were quite slow. Today, the Just-in-time (JIT) compiler helps to translate the bytecode into machine code.

When you use Java to program multithreading, you’ll love it because of its simplicity. Threads are the separate programs that run concurrently. Threads occupy the same memory space in multi-threading which is the main advantage to use it. Web applications, multimedia, games, use multi-threading.

Dynamic nature of Java supports dynamic loading of classes. It means the classes loads whenever needed in the program. Many functions of C and C++ remain supported in Java.

Java program after compilation generates the bytecode which is platform-independent. Therefore, It can run on any computer. Programming languages like C and C++ are compiled based on the platforms they run on. So, That’s the reason Java is called WORA. A platform is the hardware or software environment which is used to run a program.

Furthermore, you may have brief about Java. So, please click the link below as:

error: Please be respectful of copyright. Unauthorized use is prohibited.