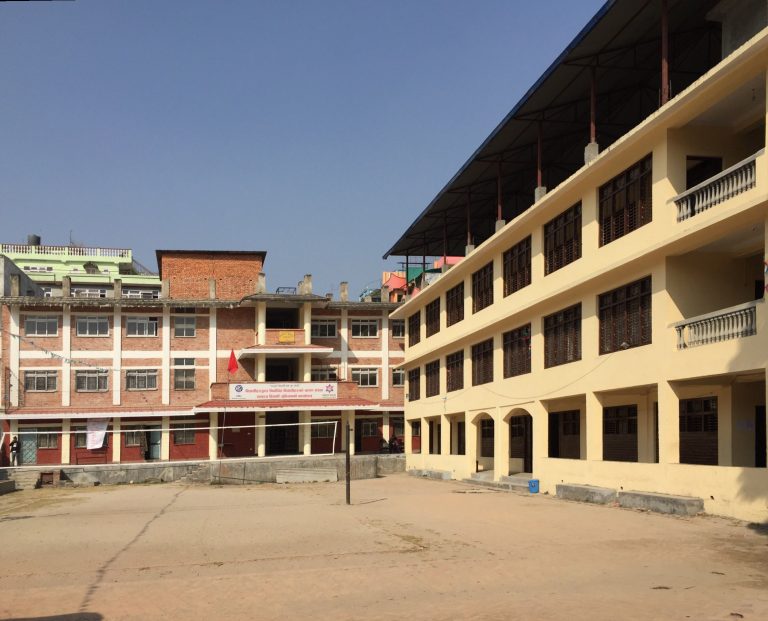 Historically, Ratna Rajyalaxmi Campus was established on 4 Bhadra, 2018 BS with 3 girl students in the building of Guthi Sansthan at Putali Sadak. Initially, this campus was named as Ratna Rajyalaxmi Girls’ College. Ratna Rajyalaxmi Campus is situated in the prime location of the Kathmandu Metropolitan city, Pradarshani Marg, the heart of this nation. It occupies about 8 ropanis of land, the Exhibition Road to the East, Adwaitmarga to West, and Kathmandu Model Hospital to North and Law Campus to the south.

Those days, classes were conducted in the morning shift only. It offered Intermediate of Arts Courses with various majors of Humanities and Social Sciences. The higher caste families’ girls of Kathmandu valley received education. During the time of Girls’ College, it upgraded to BA level in 2021 BS. The location of the college was shifted from Putali Sadak to Pradarsani Marga in 2024 BS, where it permanently stands proudly up to this date catering invaluable knowledge on various fields of Humanities and Social Sciences. Since 2024 B.S., Ratna Rajyalaxmi Girls’ College was affiliated in Tribhuvan University. In 2025, it became a multiple college as it added up management program in it along with humanities courses. It ran Management program up to 2030 BS.

The college became co-ed and was made open for all Nepalese families by changing it from Ratna Rajyalaxmi Girls’ College to Ratna Rajyalaxmi Campus in 2031 BS. It later got popularized as RR Campus. Since 2031, Ratna Rajyalaxmi Campus became well-known as the center of Humanities and Social Sciences, a renowned constituent campus of Tribhuvan University till date. The number of students so grew that Ratna Rajyalaxmi Campus ran IA classes in three shifts with varieties of majors to address the student pressure since 2037 B.S. Humanities and social sciences courses thrived with the scintillating image of Ratna Rajyalaxmi Campus in the three different shifts. The campus offered BA level programs of all subjects that it offered in IA since 2038 BS only in the morning shift in the beginning. Similarly, RR Campus provided BA level courses in all three shifts up to 2072 BS academic session. It has slashed its evening shift BA program since 2073. Now, it is running BA programs only in two shifts, i.e. in the morning and day shifts.

The prominent wooing factor of this Campus is its location. Housing the Central Department of Journalism and Mass Communication within the same compound is another prolific feature of RR Campus, which defines it too. Now, RR Campus has become choice or priority for many students from all walks of people, who seek for quality education under Humanities and Social Sciences. Academic excellence is the inescapable feature of this campus. RR Campus has preserved its long-standing quality and upheld the prestige of Humanities and Social Sciences Department of TU.

In fact, RR Campus has passed through progress by facing different fluctuations of political power from Panchayat Regime to the present changing situation by accepting every positive change in the nation. RR Campus is still in way of progress of higher-level education by providing different subjects in Humanities and Social Sciences sector. Along with two compulsory subjects, i.e. Nepali and English, 15 different major subjects of BA level are taught in RR Campus. RR Campus has been continuously offering majors as Nepali, English, Economics, Political Science, History, Geography, Home Science, Mathematics, Music, Psychology, Population Studies, Sociology and Anthropology, Journalism and Mass Communication, and Rural Development etc. From this year, RR Campus has offered Bachelor’s in Social Work (BSW) in the morning shift.